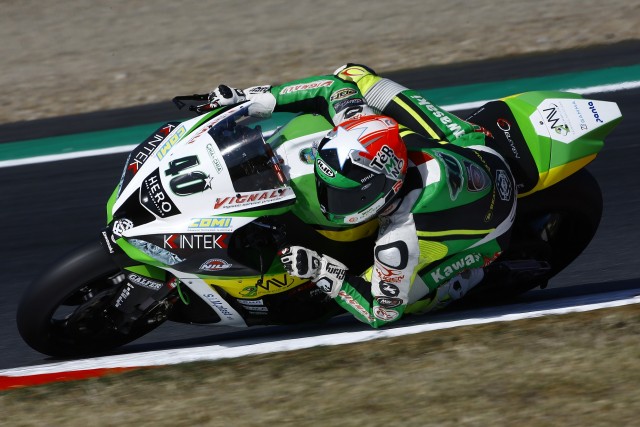 The Magny-Cours round is always very appreciate by the French public, which also this year has filled the stands giving a festive atmosphere. COMI guests lived a full immersion in the racing world being welcomed in the hospitality of the Team Go Eleven throughout the whole weekend.
The weekend of Roman Ramos starts well, the feeling with the bike is good, as well as the lap times in the race configuration. The team tries to work on different aspects of the ZX10RR, to further improve it, but not all changes give the desired result. Roman, who in the first laps of race 1 struggled a bit to be fast, towards the middle of the race, however, finds the right pace and manages to finish in the points, This newfound competitiveness gives motivation to the whole team in expectation of the second manche.
In race 2 Roman suffers the total lack of grip on the rear tire and does not allow him to fight with his direct opponent in the championship, Tati Mercado.The debutant Manuel Rocca surprises everyone riding very strong already from the first session and working with method improves his chronos turn after turn. A beautiful race and very hard-fought, full of contacts at the edge of the rules that held the breath until the last corner, which one he came out with a good 22nd place.The smile is back in Supersport, where our Stange has made great strides, in just three rounds he managed to stabilize in the fight for the points.Maintaining his position at the start he performed a series of overtaking that brought him quickly in 15th place. Then he looking for the attack on the group led by Badovini has suffered a problem at the second gear, which has slowed him, but he tightened his teeth and fight until the end to bring home the result.Not least Iturrioz, with a flash start he immediately recovered 4 positions and is in the group of pursuers. His race pace was good and on the final he won the sprint on the English Hornsey.
The world superbike today, greets one of the categories that has represented the history of this championship, Markus Reiterberger is the last champion of the STK1000!
Rob Hartog is instead the new European champion of the Supersport 600.
In the WSS300, Ana Carrasco enters in the history, becoming the first female rider to win a world championship in motorcycling.Finally, the whole Go Eleven team congratulates with Jonathan Rea and Kawasaki for winning the fourth consecutive world title.
Roman Ramos #40 (WSBK race 1; 15th):“This bike is very sensitive to adjustments, just change something the improvement or the worsening is very strong, today we had a good set up in the race, especially we were fast with used tires, from mid-race onwards, and I enjoyed driving, but tomorrow we must try to do something more.” Roman Ramos #40 (WSBK race 2; 18th): “I do not understand what happened, yesterday in the race and this morning in the warm up everything was fine, I thought I could have a good race but I had no grip from the first lap, I could not give the gas in the middle of the corner and this limited us.”
Christian Stange #88 (WSS; 16th): “I am very happy with the work of the team, I have to thank them, one step at a time we are always faster and I am living a dream. I’m sorry for the race, after only 5 laps I could not use the second gear, without this problem I think I I could have fight with Badovini.” Iturrioz Ezequiel #34 (WSS; 20th): “I’m happy with how we are progressively approaching the points, the gap is less and less, and even today I managed to keep a pace close to the top ten. The next race is at my home in Argentina, I’m very confident, my feeling with the bike and the team is great and I want to make a great result in front of my fans.” Manuel Rocca #75 (WSS300; 22th): “How nice to fight with these riders, I learned more this weekend that in all this year! n the last few laps I tried to go to the top of my group and we also gave us several shots, I also broke the fairing in a contact. Thanks to this fantastic team for the wonderful opportunity they gave me.” Denis Sacchetti (team manager):“Summing up it was a positive weekend for Go Eleven, who on this occasion was involved in all three classes of the world championship.
In Supersport we can only be happy with the improvements that Stange and Iturrioz are doing, these two guys are reducing the gap from the first every time they enter on the track, and this is a satisfaction for us, I’m curious to see them in Argentina, where the track is new for everyone and we will start on equal terms. Roman is a true professional, and here he did a great job, we are happy with him and our team, but at the moment we are struggling with a difficult bike. Manuel Rocca ran a beautiful weekend, showing character and speed on a circuit unknown to him, not bad for a debutant just 15 years old!” 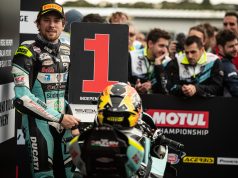 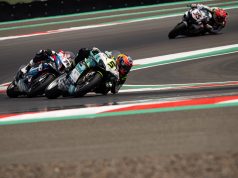 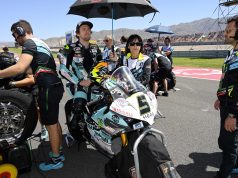