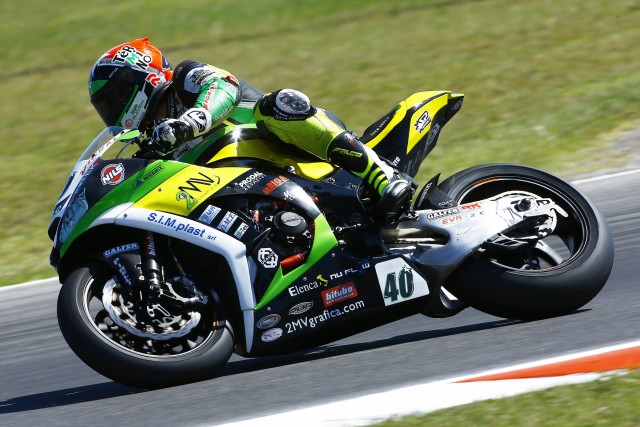 The ninth round of the World Superbike was marked by a torrid weekend with record air temperatures and asphalt, which made the practice sessions and races a challenge against the heat.The good work of the technicians Go Eleven done during the practices has remedied at the unfortunate Superpole, in which Roman Ramos has taken the eighteenth place. In the first race on Saturday, the spanish number 40 have fighting hard in the initial stages of the race, remedying a complicated start, without losing heart, Roman signed lap times in the order of the constant 37.0 up to overtake several opponents including Honda official of Jake Gagne.In the last laps, Ramos had a faster race pace than the Argentine Tati Mercado, proving the good feeling with his ZX10RR on the Misano track and the thirteenth final position could also be a ninth place.Starting to hanficap for Ramos in the race of Sunday, found themselves chasing the group since the first lap, but already from the second lap came the decisive overtakings against Andreozzi, Jacobsen and others riders.With a race pace that was valid for the top ten, Roman also managed to overtake Hernandez’s Kawasaki in the final, placing himself definitively in the points area really close from the official Honda and Yamaha, bringing the total loot of the team to 4 points. The supersport has seen the debut of the promising German Christian Stange, unfortunate author of two crashes during the practices, did not lose heart, significantly improving his lap time in the race but did not manage to finish due to lack of experience in management of the clutch.Excellent progress of Iturrioz, started from the thirty-fourth place on the grid, to have to pay a penalty taken in the warm up, manages to get a twenty-first final position, so confirming the progress and growing feeling.
Roman Ramos #40 (WSBK race 1; 13th):“Despite being in a duel against bikes and fast riders, I managed to overcome them by exploiting the braking as my strong point. In the final I had a race pace that would allow me to get into the top ten, confirming my growing feeling with the bike.”
Roman Ramos #40 (WSBK race 2; 15th.):“it was a difficult start mine, something did not work at best and we will use the data to understand the problem. I immediately recovered the rhythm until I reached the tail of Gagne and Canepa. With used tires I was faster than them and I felt very comfortable on my bike. Surely I could have achieved more, but considering the difficult weather conditions and the value of the opponents I managed to still move my world rankings.” Christian Stange #88 (WSS; rt): “These are really go fast! It’s amazing how high the world championship level is, I did not know the track and it was very difficult for me, but my speed was constantly improving and the bike is really fantastic! I thank the team and all the people who are giving me this dream.” Iturrioz Ezequiel #34 (WSS; 21th): “I feel better at every race on this bike, I’m finally in the group and I can fight with them. The penalty taken in the warm up for having gone too slow is not right for me, but but I accept it, without that I could have got more, but I’m happy with the improvements we are making with the team.” Denis Sacchetti (team manager):“We are happy with the heat received from over 68,000 paying here in Misano Adriatico, and satisfied to have confirmed Roman in points area constantly and fighting for the top ten, which lately escapes us only for a problem at the start, which I am sure our staff, who is doing a great job, will solve in a short time.
The Supersport continues with the project to give young talents the opportunity to get involved in a world championship, Iturrioz (Argentine) and Stange (German), are challenging themselves and are at the base of their path of sports growth.” 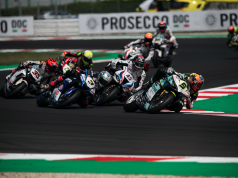 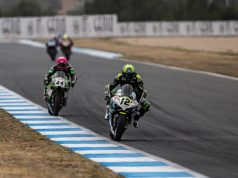